In the culmination of a review of WA’s strata titles legislation that commenced back in 2007, the Community Titles Act 2018 and Strata Titles Amendment Act 2018 have passed through State Parliament, both receiving Royal Assent on 19 November 2018.

In this article, we cover the Community Titles Act 2018 and Strata Titles Amendment Act 2018.

In the culmination of a review of WA’s strata titles legislation that commenced back in 2007, the Community Titles Act 2018 and Strata Titles Amendment Act 2018 have passed through State Parliament, both receiving Royal Assent on 19 November 2018.

The seven key areas of strata reform are discussed below.

What is Community Title?

Community title is a new form of land tenure that is similar but different from existing strata titles.

It enables multiple sub-schemes to exist under a multi-layered community title scheme. Specifically, parcels of land can be subdivided to create up to three ‘tiers’ – within each with its own community titles scheme.

When does a community scheme come into existence?

A community scheme will come into existence when the first community titles scheme (the tier 1 scheme) is registered over the land.

That tier 1 scheme will comprise of 2 or more lots and may include common property.

What are the differences between tier lots?

A tier 1 lot can be subdivided into 2 or more lots (with or without common property), the result being a further ‘tier 2’ community titles scheme.

A tier 2 lot can then be further subdivided into a tier 3 scheme in the same manner.

By way of illustration, the Explanatory Memorandum to the Community Titles Bill 2018 provides the following diagram example of a community scheme: 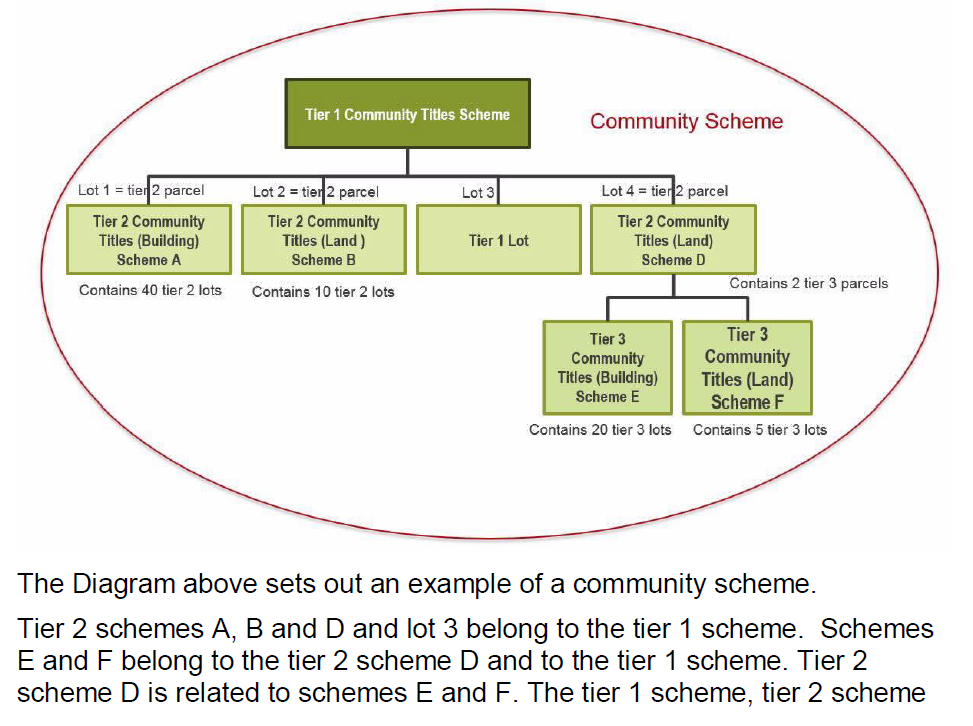 Each scheme or tier has its own community corporation and by-laws – resembling a strata company and its strata bylaws.

Within a community scheme:

Key features of a community scheme

The defining characteristic of a community scheme is its layered character, as discussed.

Other key themes introduced into the Strata Titles Act (below) can also be seen in the Community Titles Act.

Examples of key themes introduced into the Community Titles Act:

Like strata schemes, it is possible to impose restrictions on the use of a community titles scheme.

A penalty will apply where an owner or occupier contravenes a restricted use condition set out in the scheme plan for the scheme.

Community title is suited to mixing of residential uses with other uses (which could be retail or commercial uses, or even health or ageing related).

Whilst mixed-use strata developments do of course already exist under the Strata Titles Act, mixed-use can lead to disharmony between different use types.

For example, a residential unit owner’s perspective on matters like common property issues and the apportionment of levies is prone to differ from the perspectives of, say, a commercial unit owner within the same complex.

Within a community scheme, each tier can be set up with its own rules, and restrictions on use (if desired), appropriate to the types of uses it is to accommodate.

In this manner, a commercial scheme can operate alongside (but quite separately from), say, a residential scheme.

The introduction of leasehold schemes

The reforms introduce another new form of tenure known as leasehold schemes which are best described as a strata (or survey-strata) scheme created for a finite period of between 20 and 99 years.

Each lot in a leasehold scheme is subject to a registered strata lease. ‘Owners’ therefore, in fact, take a long term lease of their strata lots (rather than actually owning those lots), for a duration not exceeding the life of the strata scheme.

Each strata lease expires on the expiry day of the leasehold scheme.

Leasehold schemes can generate development opportunities on strategic sites over which parties (such as the government) wish to retain control in the long term.

For example, freehold land in a train station precinct or another activity node could be subdivided into a leasehold scheme and developed (as opposed to being sold off completely or retained and not developed). In short, leasehold schemes enable land to be developed for a range of uses and at a range of densities, with control of that land to be reinstated at a predetermined point in the future.

These reforms will assist in staged strata titled development of strata schemes.

Protecting the rights of lot owners

The new legislation is intended to protect the rights of lot owners and the rights of registered interest holders are, yet streamlining the process developers.

To this end, strata scheme amendments (ie strata subdivisions) are categorised into 4 types, each with varying requirements for resolutions and consents.

Under changes to the Strata Titles Act, strata managers must be regulated and need to comply with extensive statutory duties, to increase accountability and encourage improved professionalism of services.

The Explanatory Memorandum for the Strata Titles Amendment Bill explains that a strata management contract must:

Larger strata schemes need to have a reserve fund and associated 10-year maintenance plan – in theory, helping safeguard the condition of strata complexes in the longer term and assisting strata companies to decide how much money to set aside in its reserve fund.

Under the current Act, there are limitations in that the SAT cannot resolve disputes between a strata manager and strata company, and monetary orders in strata matters are limited to amounts not exceeding $1,000.

Enforcement of non-monetary orders is also enhanced. Currently, a stamped order from the SAT must be filed with the Supreme Court to be enforced.

The reforms enable the SAT to convert non-monetary orders to monetary orders (so that in the event of a person’s noncompliance, the Tribunal can order that person to pay money in lieu).

Under the reforms, buyers of strata units are to be given improved information prior to their purchase, including a revised disclosure form.

Under the current Strata Titles Act, a scheme can be terminated by unanimous resolution of all owners, or by an owner (or mortgagee) applying to the District Court for an order to terminate.

The reforms introduce a new process whereby 80 percent of the owners of a strata scheme are able to vote for the dissolution of a scheme, with the matter then determined by SAT.

This aspect of the reforms did meet some opposition, as it was perceived by some to undermine property rights of existing strata owners (as it was seen as enabling scheme terminations lacking the support of all owners).

Proponents of the reforms, however, say that it, in fact, empowers the 80 percent of owners with rights they previously didn’t have, further arguing that this is preferable to an application for termination being brought by a single owner to the District Court.

The majority termination process introduces safeguards in that if a vote produces a majority of 80% or more, but is not unanimous, the termination proposal must undergo a fairness and procedure review by the Tribunal.

A majority termination proposal cannot proceed without an order from the SAT, who will need to be satisfied with three things:

Vulnerable owners will also have access to funding for assistance to respond to the termination proposal.

What’s next for the Community Titles Act and Strata Titles Amendment Act?

Regulations to underpin the reforms are being prepared, and the bulk of the provisions of the Community Titles Act and Strata Titles Amendment Act will commence on dates yet to be fixed by proclamation.

We understand that the Strata Titles Amendment Act is likely to commence in late 2019, while the Community Titles Act is expected to commence in the first half of 2020.

In the meantime, contacts in our health and aged care networks may wish to consider what the community titles and strata reforms could mean either for your next development or for the ongoing management of strata schemes to which you currently belong.